Another pirate themed slot <sigh>... Or is it? 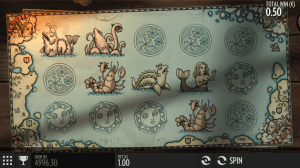 1429, Uncharted Seas, by Thunderkick is, a simple 5 reel, 25 pay line, fairly standard slot game. Like other Thunderkick slots, it’s beautifully put together and doesn’t contain any extraneous elements. Its faded pastels are a perfect colour choice for the maps and symbols, the music is brooding and expectant and the sound effects add a sense of realism. It doesn’t boast 3d environments or heaps of animation, nor are there any highly detailed video linking sequences. It doesn’t really offer anything beyond expanding wilds and freespins. However, what it does, it does with style. The uncharted theme, complete with swaying ship and sea monsters is compelling and the music and effects compliment the game perfectly.

I really like Thunderkick’s style and look forward to any release from the studio. 1492 Uncharted Seas was no exception, however the only criticism I would say is that for a person who has played a lot of slot games in their time, I found the system hierarchy a little tough to appreciate. The higher value symbols wasn’t immediately obvious and I just found myself chasing the two scatters and no more – which is not brilliant symbol design. The win line animations and the win reinforcement however was perfect.

We discarded our nautical charts and set sail into unknown waters, a strong wind behind our backs. As the ancient map spun its reels, we occasionally hit a Wild ship symbol in the second, third or fourth reels. Alas, we were attacked by a sea serpent – an evil denizen of the deep – which, fortuitously for us, made the whole reel wild and augmented our chances of winning more doubloons. 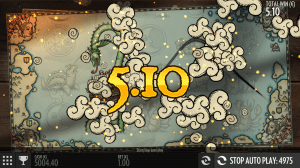 All regular fare, but somehow Thunderkick have captured the essence of the nautical theme and, even in this simple fashion, they manage to bring interest and involvement into the procedure.  You’ll also immediately notice the Thunderkick’s ‘trademark’ UI. A simple grey bar along the base of the game holds nearly all your play and settings options including graphical settings such as anti-aliasing and image fidelity. This is mainly achievable through the Unity architecture but starts to show a more familiar menu system for those new players coming from the social and casual gaming sectors. All of the buttons and settings in the UI are nice and large and have obviously been designed with phone and tablets in mind. The stake and autoplay options offer a very good range of options and the game settings allow such options as quick play, toggle cutscenes and allowing spacebar to spin – simple things that should ‘just be’ in all iGaming games. 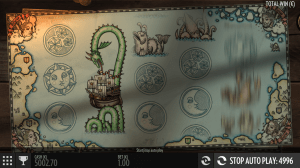 In 1429, Uncharted Seas, freespins are triggered by hitting three or more compasses. The more I got, the more freespins I enjoyed (10 freespins for 3, 20 for 4 and 50 for 5 compasses). Again, there are no mind-warping animations, but the simple pan and zoom cutscene is perfect for the atmospheric feel of this game.

We spun three compasses and our craft entered stormy seas. For ten whole spins (occasionally more) the heavens opened. Thunder cracked above our heads and the lightning threatened our stricken vessel. However, we survived the ordeal and sailed into calmer waters with our chests overflowing with booty.

OK, I watched the freespins unfold and counted the accumulated winnings, but I was there in spirit. This feature came around enough times during the review process to keep my interest, and I felt that, during that time, I’d received a good, balanced amount of play.

The game maths profile felt right. In the playthrough the freespin sequence occurred enough times to keep me hooked. Whilst the game isn’t massively volatile (there were some decent pays but nothing I would consider to be jackpot) it was volatile enough to appeal to both software gamblers and traditional players alike. Where I would expect newer player to turn off after 15 mins of play, the smart visual theme may provide enough to retain players.