In Space No One Can Hear You Yawn… 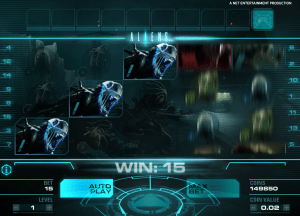 NetEnt’s slots offering for the 20th Century Fox, Aliens franchise is a combination of a traditional multi-line, multi-column  slot game and a smooth-scrolling, first-person shoot ‘em up. With its well rendered, fully 3D intro, like a scene straight from the second movie, and the dark, brooding music, this game is seemingly packed full of atmosphere. And in this department, at least, you will not be let down.

This is a graphic hungry slots game that will take a little longer than some of the others to load, but once it’s up and running, you will quickly understand why it needed the extra few seconds load time.

This is a richly presented slots game that immerses you in the atmosphere of the Aliens universe. Animations are fluid and the sub-game is presented beautifully as you take on a marine progressing through the tight corridors of what I assume is the space station on LV-426. What’s amazing is how well NetEnt have converted the desktop game to a mobile incarnation. The overall visual feel of the mobile game is like for like, the features are the same along with the feature specific UI additions, and the unique FPS theme of the bonus rounds has also been included. There are a few very small performance impacts on lower-end devices but for the experience, it’s more than acceptable. 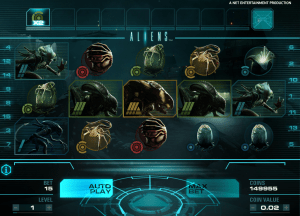 With 15 pay-lines across five columns and three rows, this appears to be a standard slots game and in the base game (referred to as ‘The Search’) this is pretty much the case. For the bonus games however (‘The Encounter’ and ‘The Hive’) NetEnt has gone a little bit further and introduced two 3D ‘FPS-esque’ on-rails levels.

The base game is intuitive enough, and all the expected options – Max Bet, Auto Play, Pay-out Charts and Game Settings – are easily located in the Aliens motion detector type display.

The semi-transparent slots symbols represent alien eggs, Face-Huggers and fully grown Aliens, with the latter animating for winning combos.  Whilst easy enough to differentiate from each other, you may find that, due to their transparency, subdued colouring and the animated smoky, dusty background, that a couple of the graphics are hard to interpret. One of them – a Face-Hugger on a person’s face – was only really discernable in full screen mode. This required another, somewhat lengthy reload and, surprisingly for a moderately high end machine, a drop in graphics quality in order to remove some of the ambient animation and stop the slight jerkiness that crept in at this point.

As you play, you accumulate multipliers on your Alien Activity Meter for every winning combo and lose them again, one by one, for every subsequent failed spin. Wildcards can take the place of symbols, but do not count towards your Meter accumulation. If you do manage to fill your Meter, something that happened frequently enough to not get frustrated, you’re taken to the second level.

You’re standing in a dimly lit, high tech corridor, your gun is loaded with one clip of bullets and you just know what is coming next…

This 3D level is styled like a typical first person shoot ‘em up. Your marine jogs along the metallic floor, shooting an ever-increasing wave of Face-Huggers and fully grown Aliens that want to suck your face off or shred you to pieces whilst searching human corpses for further ammo and accumulation coins as he progresses. On this level, each spin is a guaranteed win and, as the reels do their thing, you progress along the corridor to look for replacement ammo clips amongst your fallen comrades (which are quite graphically portrayed, with their severed heads and excessive quantities of blood), before shooting the next wave of creatures that skitter and race towards you along the floors, walls and ceilings. I’ll be honest and say that it took me a few spins before I realised that these are in effect free-spins. The in-game help didn’t fully provide exactly how this stage worked but once figured out, it’s actually quite a smart game feature in its own right. If you complete all 10 sections, you’re through to The Hive. If you run out of bullets, the Face-Huggers or Aliens will do what Face-Huggers and Aliens do best, and you’re back to the first level.

It’s a great looking level, but unfortunately, looking is your only option at this stage. The jogging, the searching and the erratic shooting of the well depicted Aliens is totally automatic and,

after the first four or five viewings, you may well find yourself using this period to put the kettle on and grab a biscuit, which is a shame, because this section is literally dripping with atmosphere, cool graphics and appropriately squishy sounds effects.

You can see the effort that NetEnt has put into it, but it’s negated by the lack of interaction within the level. Considering that each run/search/kill segment is around 20 seconds, you could find yourself sitting there for around four minutes if you’re successful enough to get through to the final level.

When you progress through 10 successful spins in The Encounter stage  it seems you are taken to The Hive, where you must destroy the Queen and her eggs before Aliens, attacking from side passages, can get you. 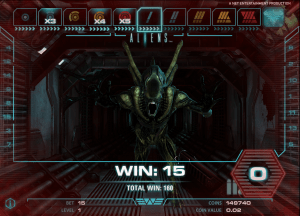 A Hive Health Meter shows the damage you are causing with your grenades, the strength of which is determined by random multipliers. Kill her before they kill you, and you rack up the coins.

Again, this is another  ‘on-rails’ stage and, whilst we totally accept that if you’ve reached this far you’re winning a decent stack of coins, it would be nice to actually be a part of that winning process. However, in this case you could be sat, immobile for six or seven minutes whilst both this stage and the proceeding one run their course. Better make that coffee a tall beer!

All in all, it just lacked enough gameplay in the two sub-games to keep our interest, and we could see casual players turning away from this one after a couple of sessions, whilst die-hard sci-fi and Aliens fans will be screaming in frustration that they don’t get a chance to shoot the Aliens themselves. 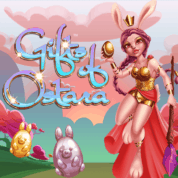