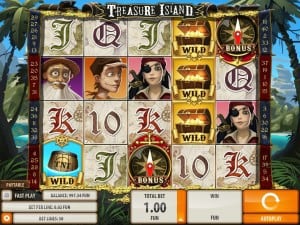 Treasure Island is another Quickspin slot game that combines classic storytelling with a fantastic visual theme and engaging slot features. Is the latest production from the Stockholm developer a clear ‘X marks the spot’ map to buried treasure or will it disappear into Davey Jones’ locker?

Treasure Island is a 5 reel, 4 row, 40 win line video slot in traditional Quickspin style. The theme as you’d expect is based on Stevenson’s book of buccaneers and buried gold and right from the get go you’ll be enamoured by the visual style that the team at Quickspin have produced. The game has really nice, crisp, extremely high quality graphics that really add to the experience of playing the game. The style is reminiscent of the last generation of Lucas Arts’ Monkey Island games which is no bad thing at all. The one problem I has is that the symbol hierarchy was not obvious particularly in the character range and I found myself ignoring almost all symbols except for the Bonus Compass or the TNT wilds (exploding wilds). 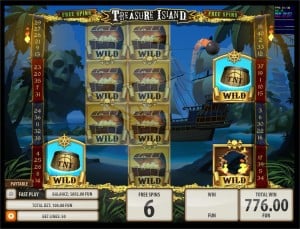 The audio that comes with the game is also top notch. The audio really suited the theme and the atmosphere created while playing. By default the volume of the game was also just at the right level to not be taking away from the slot game itself but still added a great thematic ambient background noise. At present however there is no mobile or tablet version, which is a let down given this is definitely a game that would feel at home on one of the modern mobile devices [ED – 9 Nov 15 – Now there is!]. At the time of writing I understand that Quickspin are working on an HTML5 version but with the amount of information/features in the game we could be a long way away from a short release.

On load you’re presented with a useful quick help screen introducing you to the key features allowing you to jump right in with a basic understanding of what you need to chase. The in-game paytable is more comprehensive and to be honest, a little long winded and after 3 screens I simply stopped reading the text hoping that the graphics would spoon feed me enough to pick up on all nuances. The UI is very intuitive and uses Quickspin’s trademark framework and buttons. The main spin button is large and clearly visible to any user playing the game. This all makes the ease of playing the game very simple and user friendly.

The features of this game are great, they are really rich and Treasure Island is clearly one of Quickspin’s most feature abundant game.

Treasure Island returns a very impressive 97.07%, which is good for players.The game doesn’t feel too volatile and has a pretty high hit frequency which at times means a number of wins below the bet. Treasure Island also offers a variety of different symbol wilds of which only two of the wild symbols are available during the main game. These two are the stacked and the TNT Wilds. The other three wild symbols found in Treasure Island are only found during the free spin rounds. These wilds are extra, super and locked barrels. The free spin is an extremely fun feature within this particular slots game as it starts off with the Island hop bonus which enables the player to win even more free spins, instant wins as well as extra features. My problem with the free spins is again the change in symbol value that isn’t relative to the symbol hierarchy in the main game. This pick round continues until the player selects an ‘advance’ pick and the free game start with all the perks collected from the Island Hop. Being able to pick the features that apply to the standard free pins is a brilliant way to combine legacy mechanics to create something a bit more engaging, fun and refreshing. Particularly as no freespin round will be exactly the same. 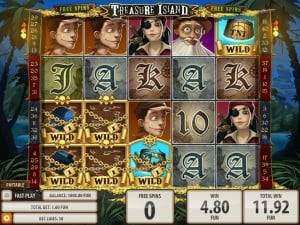 Treasure Island also offers up many other bonuses to the players such as the Pirate attack bonus which can be initiated in exchange for just two barrel wilds. I really enjoyed this bonus as it is very aesthetic which ties in with my opinions of the excellent graphics. When you do have two barrel wilds and trigger the bonus all non-wild symbols on the reel turn invisible which exposes the pirate ship in the background. The pirate ship now fires cannon balls at the reel mercilessly. Every time a cannonball hits the reel it turns the symbol it hit into a wild and if it hits a pre-existing wild then it explodes it into several others. The reel now spins again all readied with the extra wilds, you can now wait for the stop and the inevitable nice win. The only drawback is that I would prefer some sort of progressive features or perhaps a deeper dive into the narrative given it’s rich heritage. 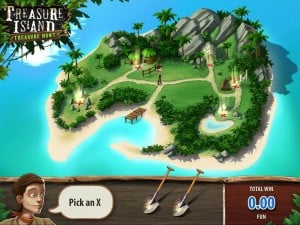 The enjoyment to the player from this game is unparalleled in my experience with these types of slot games. With so many unique bonuses tied in with the excellent audio and the great graphics and sequences this game makes for a great experience and an extremely enjoyable one too. On top of all of that the jaw dropping return of 97.07% makes this an unbelievable slots game that can provided large potential gains along the road as well as the enjoyable pirate filled experience of playing the game itself.

Overall I think this is one of the strongest slot launches of the year. The sheer number of bonuses in particular the freespins bonus means that there is always something new to discover and will keep you amused, keep you guessing and always keep you coming back for more and more pirates and cannonballs. This is definitely going to be a game that will be permanently on my regular list of games. A great edition to Quickspin’s already strong slot portfolio.