The Discovery of El Dorado 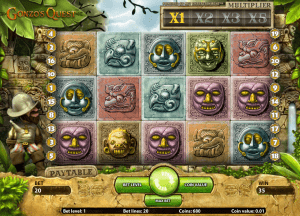 According to many media publications Net Entertainment’s Gonzo’s Quest is one of the most successful modern slot games in recent times. Success is a real-money gambling game is so subjective and most of the time boils down to net game revenue. Of course it’s hard to obtain such figures openly so I thought I’d put the game through Return to Player’s objective review criteria to see how it fares.

The game is themed around Gonzalo Pizzaro’s expedition to locate the famed city of Eldorado, which is a rich narrative to exploit, particularly as the player can feel part of the gold quest. As with all NetEnt’s titles from the last 2 years, you can expect high production values, a CGI intro, in-game character animations and a pretty standard NetEnt UI. In terms of aesthetics and symbol design the team from Stockholm have really done a great job on the desktop version.

The game is colourful, utilising strong colours to represent and distinguish the symbols – chasing the bonus symbol (Freefall symbol) and mapping the wilds to the completing paylines is as easy as it gets.

The reel speed is well timed also and when you factor in all the additional animations, the overall game cycle is perfect. 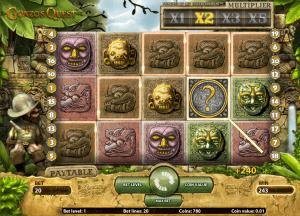 The wins are reinforced well with some nice connecting animations and the game smartly avoids rewarding stinker pays. Sounds are as you’d expect high quality and fit well with the overall Aztecan theme. A nice mix of what I can only describe as orchestral jungle sounds and panpipes. I did find the occasional grunts of Gonzalo slightly annoying but they didn’t happen all that often. Overall the presentation and packaging of the game is flawless. The one criticism that I have is that the HTML5 version is less than stellar. There is nothing particularly wrong with it per se, but a lot of the whistles and bells from the desktop version are missing and performance seems far too slow. Given how good NetEnt’s recent mobile variants are (see Aliens), it makes me think that Gonzo’s Quest was one of the early To-Go titles that didn’t quite reach its full potential.

The mechanics of Gonzo’s Quest are pretty basic to be honest. The key feature is that of the ‘Avalanche Reels’ or to you and me, cascading reels.

I’m starting to dislike game developers who wrap up well known mechanics into new and frankly needless handles purely so the marketing department has something new to spin.

The bonus game is basically a free spin feature but they’ve called it ‘Freefall’ so, you know, it’s different from all the other free spin bonus features out there 😉 A really neat addition to both the base game and bonus game however is that they have a win line multiplier which increases with the more win lines you connect. The use of the multiplier really puts emphasis on the base game wins and really draws the player in as you start to analyse the game window to see what wins lines you have and what potential wins you’ll get after the Avalanche. In the Bonus game the multiplier increases again meaning that if you manage to chain together 3 or 4 combinations you can be looking at 9x or 15x bet multiplier (respectively). The great thing about the game maths is that chaining together 4 cascading wins isn’t an infrequent event. I can’t recall if at the time that Gonzo’s Quest went live this feature was widely adopted in other games, but regardless NetEnt have taken it and made it very special. 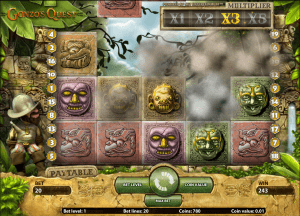 The published RTP rating of Gonzo’s Quest is 96.00%, which seems to be the middle ground between house edge and a return that players are happy with. Gonzo’s Quest has a decent hit frequency and isn’t a hugely volatile game so appeals to more casual or softer gamblers alike. The bonus round frequency is quite low and at many times I was spinning in excess of 100 spins before hitting the bonus; However as mentioned above the base game is hugely enjoyable to play standalone so you’ll not feel too hard done by.

Saying that this game is good is an understatement. Gonzo’s Quest is brilliant. It’s a perfect example of what happens when you pull together a brilliant maths model and game design, high quality art and sound, and a rich theme that is welcoming to the majority of players alike. I started this review stating that Gonzo’s Quest is one of the most successful modern slot games in recent times, and 3 hours and ~4500 characters later, I can fully understand why.